The overall endocrine system requires proper type of iodine, in an organic form. 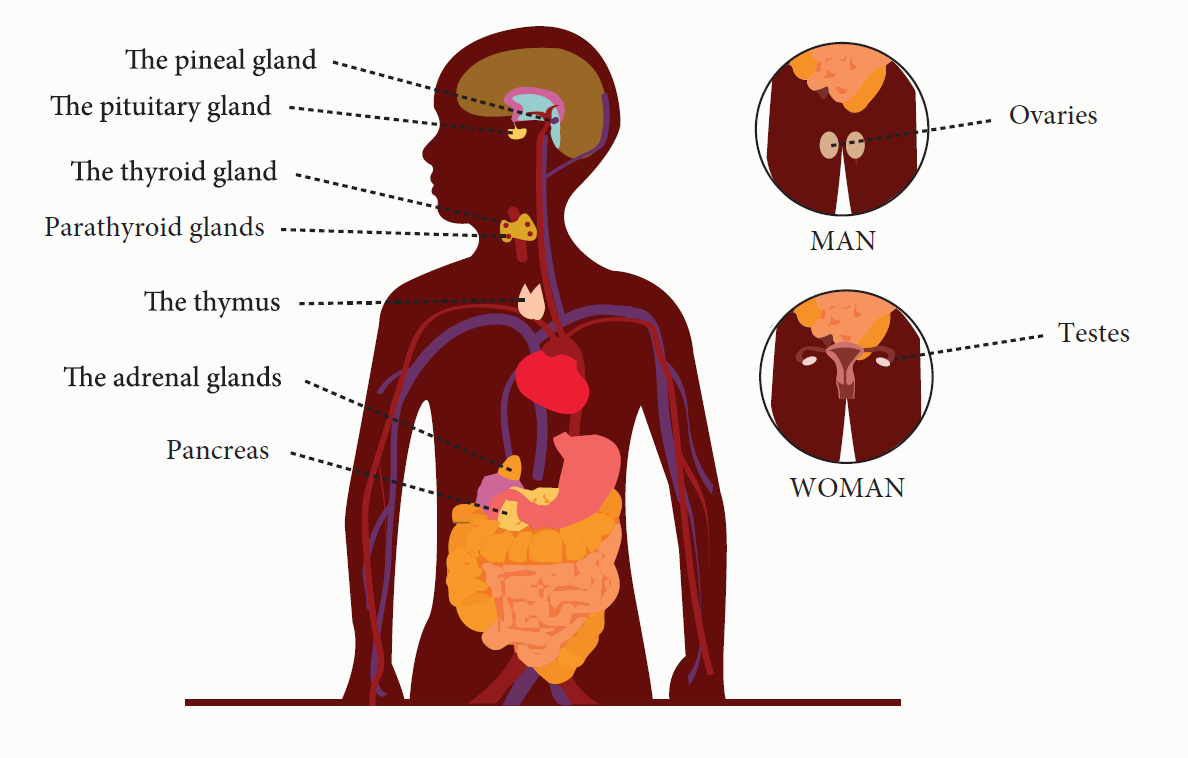 Endocrine system is one of many subsystems of our body and is constituted by a network of nine glands.

Glands of the endocrine system.

A. The pineal gland – located in the head, is the body’s light sensor. Its size shrinks with the age. It is the main source of serotonin – the hormone of our inner happiness. The serotonin also serves as a transporter of nervous signals to the whole body. At night time, the serotonin transforms to melatonin, which is the hormone regulating our biological life cycles (i.e. sleeping or conscious). Furthermore, the melatonin also affects other hormones such as hormones of menstrual cycle and the formation of germ cells.

B. The pituitary gland – same as the pineal gland, it is located in the head and is divided into anterior and posterior lobe. The anterior lobe produces six hormones, including growth hormone, which affects the development and growth of the organism; or thyroid stimulating hormone, which controls the activity of the thyroid gland. The posterior lobe produces several other hormones, such as oxytocin, which facilitates uterine contractions during pregnancy.

C. The thyroid gland – located in the neck, symmetrically distributed on both sides of the axis of the center. The thyroid gland produces hormone thyroxine, which controls metabolism, protein synthesis and has thermo-regulatory effect. The hormone calcitonin affects the transformation and deposition of calcium and phosphorus in the body.

D. Parathyroid glands – four small glands that are also found in the neck at the top and bottom of the thyroid gland and produce hormones that affect the growth and development of bones as well as their strength.

E. The thymus – also called as “childhood gland” is stored behind the breastbone and in adulthood is lost. It is responsible for the immune system or other defense processes.

F. The adrenal glands – are found in the kidneys and have several functions simultaneously: they help control the blood sugar levels in the body, increase the burning of proteins and fats, control blood volume and help manage blood pressure and contribute to the development of secondary sexual characteristics.

G. Pancreas – produces enzymes that help in digestion of fats, sugars and carbohydrates. It also produces insulin, which helps to maintain constant level of sugar in blood.

H. Ovaries – produce hormones that are responsible for development and maintenance of female traits as well as pregnancy; they affect the menstrual cycle and also to some extent the fertility.

I. Testes – produce hormones that are responsible for the growth of male sex organs and development of male characteristics and features. They also increase the muscle mass.

Let us explain the function of the endocrine system on the following example:

Imagine your body as one big factory, where machines must be programmed correctly and all consecutive processes closely aligned. In that case everything works flawlessly. However, the factory also depends on its suppliers of for example, raw materials or fuel and energy but also on the consumers of finished products as well as on the waste. This entire cycle is controlled by the management, with the director on top. If for some reason the supply is delayed or the regular demand stops, problems start occurring. In case of capable director and the management, the starting problems can be resolved while full functioning and operation of the factory. However, in case of not fixing the minor problems on time, the problems can accumulate to such extent that even crisis management cannot resolve the situation and the overall production stops and the factory gets closed.

For the comparison, thyroid gland serves as such controlling organ in our system. While other endocrine glands need iodine just as one of several elements necessary for their correct functioning, thyroid gland solely functions

The necessary condition for effective functioning of these processes is the fact that the thyroid itself has enough iodine, there is regular and sufficient supply of iodine and thus the thyroid can dispose the iodine adequately. Using of JODA ORGANIKA® can serve as prevention from disturbing the correct functioning of endocrine system or as fixing the actual damages caused by the continuing lack of supply of organic iodine, which does not get into our

organism through regular diet. Let’s give the body what it needs and help to restore its proper functioning.